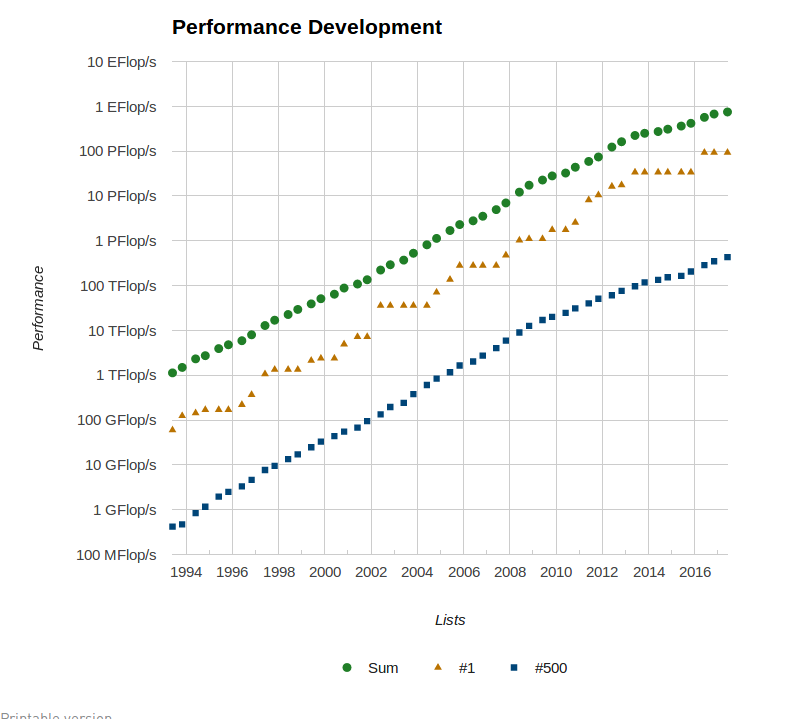 By 2005, most of the major manufacturers of microprocessors had decided that the road to rapidly increasing performance lay in the direction of parallelism. Rather than trying to continue to develop ever-faster monolithic processors, manufacturers started putting multiple complete processors on a single integrated circuit.

All of this raises a number of questions:

Let's take a brief look at each of these questions.

Why we need ever-increasing performance

The vast increases in computational power that we have been enjoying for decades now have been at the heart of many of the most dramatic advances in fields as diverse as science, the Internet, and entertainment. The following are a few examples:

Although the video below sheds light on how supercomputers are unraveling the mystery of the human brain by delivering the most exquisitely detailed human brain models ever created, It is a wonderful example of how ever-increasing performance is a game changer. What if instead of behavioral research, scientists could use the models to study cognition, simulate and study disease, and learn from the ways of the brain—everything from how it uses energy to how memory, representation and even consciousness itself are constructed?

These and a host of other problems won't be solved without vast increases in computational power.

Why we are building parallel systems

How then, can we exploit the continuing increase in transistor density? The answer is parallelism. Rather than building ever-faster, more complex, monolithic processors, the industry has decided to put multiple, relatively simple, complete processors on a single chip. Such integrated circuits are called multicore processors, and core has become synonymous with central processing unit, or CPU.

Why we need to write parallel programs

As an example, suppose we need to compute $n$ values and add them together. This can be done with the following serial code:

Now suppose we also have $p$ cores and $p$ is much smaller than $n$. Then each core can form a partial sum of approximately $\frac{n}{p}$ values:

Here the prefix my__ indicates that each core is using its own, private variables, and each core can execute this block of code independently of the other cores.

Here we're assuming the cores are identified by nonnegative integers in the range $0,1,\dots, p-1$, where $p$ is the number of cores.

When the cores are done computing their values of my_sum, they can form a global sum by sending their results to a designated master core, which can add their results. 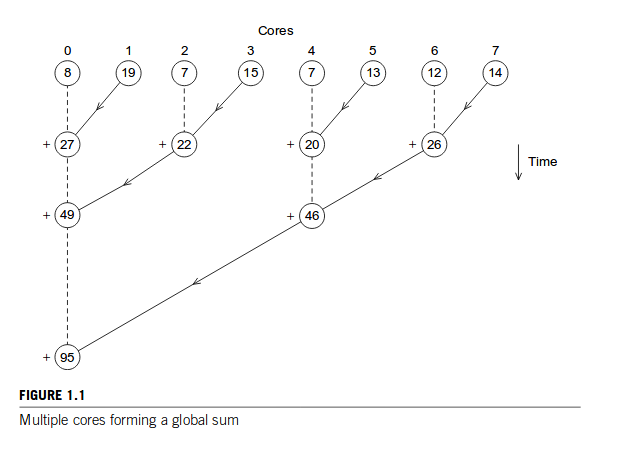 We might expect that software could be written so that a large number of common serial constructs could be recognized and efficiently parallelized, that is, modified so that they can use multiple cores. However, as we apply this principle to ever more complex serial programs, it becomes more and more difficult to recognize the construct, and it becomes less and less likely that we'll have a precoded, efficient parallelization.

Thus, we cannot simply continue to write serial programs, we must write parallel programs, programs that exploit the power of multiple processors.

How do we write parallel programs

There are a number of possible answers to this question, but most of them depend on the basic idea of partitioning the work to be done among the cores. There are two widely used approaches:

The first part of global sum example above would probably be considered and example of data parallelism. The data are the values computed by compute_next_value(), and each core carries out roughly the same operations on its assigned elements.

In both global sum examples, the coordination involves communication: one or more cores send their current partial sums to another one. The global sum examples should also involve coordination through load balancing: even though we didn't give explicit formulas, it is clear that we want the cores all to be assigned roughly the same number of values to compute. If, for example, one core has to compute most of the values, then the other cores will finish much sooner than the heavily loaded core, and their computational power will be wasted.

A third type of coordination is synchronization. In most systems the cores are not automatically synchronized. Rather, each core works at its own pace. In this case, the problem is that we don't want the cores to race ahead and start computing their partial sums before the master is done initializing $x$ and making it available to other cores. That is, the cores need to wait before starting execution of the code.

We need to add in a point of synchronization between the initialization of $x$ and the computation of the partial sums: synchronize_cores().

The idea here is that each core will wait in the function synchronize_cores() until all the cores have entered the function--in particular, until the master core has entered this function.

Currently, the most powerful parallel programs are written using explicit parallel constructs, that is, they are written using extensions to languages such as C and C++. The complexity of modern cores often makes it necessary to use considerable care in writing the code that will be executed by a single core.